For some years my brother Greg has been after me to attend the Soule’ Live Steam Festival in Meridian, MS.  Now, you’d have to know my brother (and some of you do). Like my husband has the “guys at the camp,” with Greg it’s “the guys at the shop.”  The guys at the shop, however, have an affinity for steam engines and just about anything that’s large, heavy, made of iron and runs on steam.  (Or gasoline. Or diesel.)

The Soule Live Steam Festival is an annual event held at the historic Soule Steam Feed Works / Mississippi Industrial Heritage Museum the first weekend in November each year. It’s a delightful, educational, family-oriented event, and visitors will see many steam engines at work.

Greg and his friend Eddie brought several of Eddie’s steam engines, and they weren’t the only exhibitors.  But the heart of the event is the Soule Steam Feed Works itself.  The company manufactured machinery and steam engines for the lumber industry from the late 1800s through the first part of the 20th century.  At that time, steam was king – and it was portable.  Soule’ built a rotary steam engine that was portable.  A visit to the factory/museum is a step back in time, but not quite so far back as one might think.  Steam is still used in manufacturing – in south Louisiana, steam runs the sugar mills that grind cane and product syrup and raw sugar.

At Soule, steam fans come together, along with railroad afficionados.  The railroad station is close by the steam works, and the weekend also hosts Railfest, a short walk away from Soule Steam Feed Works.

Some of the more portable engines on exhibit at Soule’.

I attended on Saturday, and in addition to steam engines and a look into a not-so-distant  manufacturing past, the event hosted several attendees and exhibits from the Carousel Organ Association of America.  THESE INSTRUMENTS ARE COOL.  I’ll admit, this was a deciding factor for me.

Me: “more than you and your friends have?”

Yes, it’s a functioning baby pipe organ.
There was nonstop carousel organ music in one of the large workshops.  At one point, two organs played a duet – which was fairly excruciating, because one was tuned to C and the other to Eb.  Ouch. Somewhere Over the Rainbow sounded more like Somewhere under the Stormy Weather.

I can also say that I’ve now heard Lady Gaga’s Bad Romance on carousel organ. I couldn’t stop laughing. (You can find out more about the carousel organs here: http://steamfest.weebly.com/ ) A gifted bagpipe player also provided wonderful musical entertainment on the grounds. (I love bagpipes, so this was a real treat!) The museum had historic printing demonstrations, a spinning and weaving display, and a broommaking machine. I even brought home some freshly ground cornmeal, ground on site by one of the exhibitors.

Two of the many engines on display in the museum.

Right before sunset, Alabama Art Casting held a demonstration of melting, pouring and casting iron.  “Industrial heritage”is a term you don’t hear everyday, but think about it.  Progress is made by industry, and industry is born out of humanity’s desire to make life better and easier.  The “Industrial Revolution” isn’t just something taught in school; this is how our country – and others – were built. 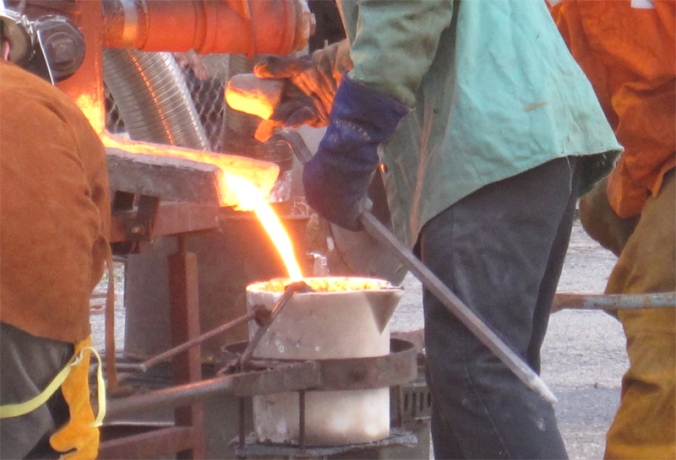 Molten iron, poured from furnace into a heated crucible.

Later in the evening, we attended the volunteers’ dinner at the Temple Theater.  This is an historic theater, built in the 1920s in “Moorish Revival Style” by Shriners.  The barbeque was delicious, and just being in this beautiful place was a treat. Visit their website at https://templetheater.wordpress.com/

But it got better. After dinner, we were treated to an organ recital and silent movie – with live organ accompaniment.  The theater has its original Robert Morton organ, and we sat back to watch a Buster Keaton classic – with a live organist providing the soundtrack.  What a treat!  Greg, Eddie and I agreed that it was an outstanding weekend, with the guys pronouncing this the “best ever” of the numerous Live Steam Festivals they have attended there. Visit their website here: http://www.soulelivesteam.com/home.html – if you can’t make it for their festival, they offer tours throughout the year.  It’s well worth a visit.

I drove home Sunday in a car scented with cedar – one of the exhibitors had a large lumber saw set up (powered by a steam engine) and was milling lumber.  Leftover cedar shavings were there for the taking, and they’ll provide great garden mulch. All because of the power of steam! 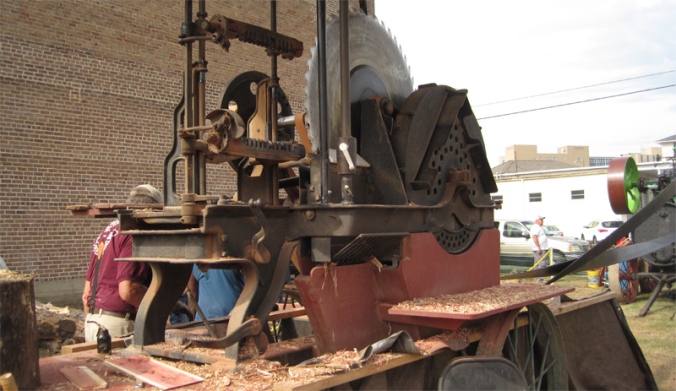 During our regular weekly prayer group the other day at the Sacred Center, we had a guided meditation that brought up the image of fire.  My recent steam adventure came to mind. Nearly everything I’d seen last weekend had been powered by steam and fire.  During our subsequent discussion, I mentioned my trip to Meridian and the Soule Steam Festival.  These are massive machines, all run on steam power. We can think of fire as being consuming, cleansing…but also transformative, an agent of change, and a source of power and energy.  Just as fire can provide incredible energy, a spiritual fire can refine us, and it can also magnify our strength to do what may seem impossible.

See some sights and sounds of the event, including Bad Romance on a carousel organ:  https://youtu.be/RS2Xl_tGB1Y  (you may have to copy and paste)