Someone asked me at a recent church performance, “how did you find us?”

Ah, the wonders of the internet.  I’ve been contacting people for years about Women at the Well. I have used clergy directories, word of mouth, mailed postcards and letters, called, emailed, and have visited many websites to search for and connect with congregations that might be interested in the music and the message of Women at the Well.  Music partner Joshua (aka Bubba) and I have met some wonderful people and visited churches and congregations of various sizes over the years.  I can’t exactly compare us to the early Christians, but hitting the road and visiting other churches, groups and denominations is an awesome experience, and is teaching me whole new lessons about God providing what we need.

Last spring we visited several Unity churches as well as Episcopal churches.  Rev. Sandy Boyer of Unity of Hagerstown, MD helped us to make connections with other Unity congregations – all of this done by distance and online.  I was so happy to meet her and visit in person!  At that time, their congregation was meeting in a temporary space; since then, they have begun meeting in space provided by St. Mark’s Episcopal church in Hagerstown.  While intention, prayer and love can bring holiness to most places, their intention, prayer and love put ripples into the cosmos saying “we’re ready for a new home!” I’m delighted that they have found a space that is more, well, worshipful! God provided.

On that same trip, we also performed at Unity of Palmyra, Pennsylvania.  They were gifted with a church building.  Yes, gifted.  Given.  Someone gave them a building – a church building. This particular church building had been built by a different Christian denomination about a hundred years ago.  That congregation grew until they needed a larger space.  Rev. Julie Vance told us that the church had been purchased by local contractors with the intention of giving it to a congregation.  Other groups had applied for the building, but the Unity congregation received the gift. God provided. 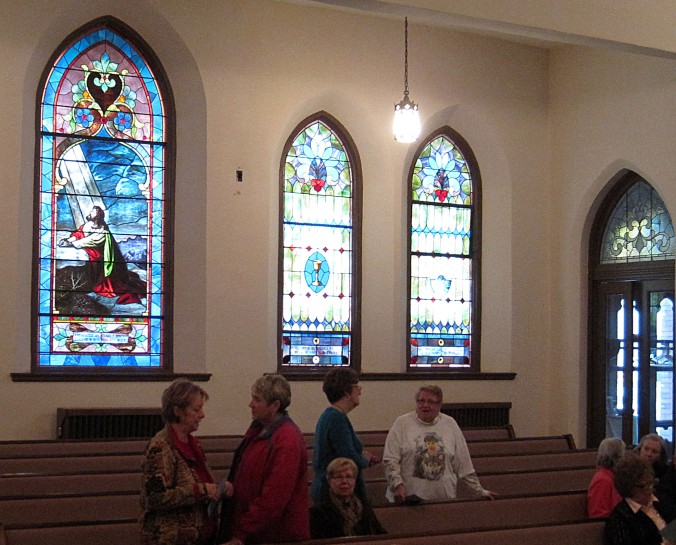 Interior of Unity of Palmyra, PA. They were given this church building. Wow!

I wish I had some better photos, but this should give you an idea of the gift. This was taken as we were setting up and early birds were trickling in for the concert.  (Alas, taking pictures isn’t high on my list when we are setting up and running sound checks – I guess that’s why I don’t have an Instagram account…)

I love the stories of buildings, especially places of worship. They carry the spirit and intention of generations of prayer and community.

St. James Episcopal Church in Cedartown, Georgia is such a place.  It’s not a big church, and it’s over 125 years old.  In the 1880s, an Episcopalian couple from New York began having Episcopal services in their home.  The congregation grew, raised funds for a church, and the funds were matched by the couple, Mr. & Mrs. A. G. West.  As their home church in New York was St. James, the name St. James was chosen for this church in Cedartown. 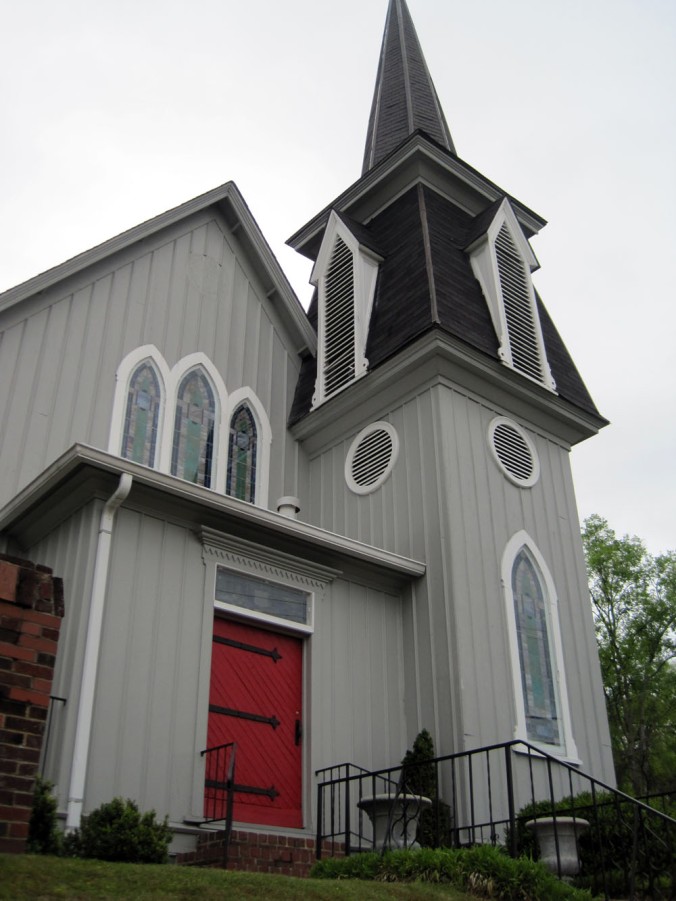 The current rector of St. James, Fr. Kemper Anderson, came to the priesthood after 3 decades of work as an emergency medical technician, police officer, and Coast Guard Reservist.  We found common ground as he also plays guitar and sings – and while in the Coast Guard, he came to Louisiana to assist with hurricane cleanup and recovery.  His wife Phillipa is a member of a vocal group that I want to hear live one day: Vintage Vocals.  (Heck, I want to sing with them live, too! The CDs will have to do for now, though.)  The congregation didn’t need a building – but the rector seems to be just the right fit.  The blessing works both ways: What a wonderful, welcoming congregation! God provided.

B & B on the Rock at St. James Episcopal Church.  Photo by Fr. Kemper Anderson.

God always provides, but we have to be ready to receive! Sometimes what we’ve prayed for doesn’t look quite like what we anticipated or hoped for, and we might miss it when it shows up. (Then again, there are times that an answer to prayer or a wish fulfilled arrives so quickly and so exactly that you are blown away. Like my singing bowl.)  It’s important to trust, and to keep your eyes and mind open. I think that an attitude of “OK, God, however and whenever you want to deliver it is fine with me, because I know you have it all figured out” is important.  But boy, sometimes that’s a challenge!

I’m reminded of a true story that friend/author/teacher Lynn Woodland shares in her Miracles Course.  A man in one of her classes was praying for “a wonderful relationship with Mary.”  Mary was his wife, and they had been having problems.  They finally wound up divorcing.  He let go of the prayer, because – well, they were divorced, right?  He went on with his life, and over time began dating again.  He met and formed a wonderful relationship with someone new, and his life was richer than ever, in large part because of this relationship.

Her name was Mary.

Yes, God has a sense of humor.  And God provides.