In south Louisiana, it seems that the dead play as vital of a family role as do the living. Before I was born, my grandmother’s youngest sister Louise (“Sweetheart”) had married and moved to the west coast. She was interested in joining DAR, and my grandmother, back here in Sweetheart’s home town, did the genealogical research. (This was long before the days of the internet.) My great-aunt joined DAR years before I was born, but I grew up with a knowledge that I had ancestors who had supported the cause of American independence in the Revolutionary War. “You could join DAR,” my grandmother (not a “joiner” herself) told me. She wanted me to know that my patriotic roots ran deep.

At home, I fly the flag. Solar lights keep it lit at night.

I thought that one day I might do so. I grew up knowing that while the USA wasn’t perfect, it was a very good place to be – and that as a US citizen, I have a responsibility to be informed and engaged. Our children were taught this.

About 8 years ago, I felt the urge to do something more proactively patriotic. I contacted my local DAR chapter through the national DAR website (www.dar.org)and asked about membership. I received an incredibly kind and welcoming phone call from the chapter regent. I remember hanging up the phone and thinking “why didn’t I start this process sooner?”

I’ve been a member now for 7 years. Every once in a while I get an occasional surprised look from someone – a new friend or acquaintance – when they learn I am a DAR. I’ll joke about it: “Nope, sorry, left the gloves and hat at home!” In the words of author Cynthia Moore writing in Town & Country magazine, “We’re not all thin-lipped white women with our noses in the air.” Yes, people have misconceptions about DAR. I’ve heard a lot of them. I’ve even had some of them myself (which is probably why it took me a while to look into membership). But the truth is that this is an incredibly diverse, active organization.

One of our chapter projects: Placing flag disposal boxes in local libraries. Folks know they aren’t just supposed to throw away a worn American flag, but what to do with it? The boxes were generously made by a “HODAR” – “husband of DAR!”

The mission of DAR is threefold: Education, Historic Preservation, and Patriotism. DAR is strictly non-political. There are currently more than 185,000 members in over 3,000 chapters around the world. Membership is open to any woman, aged 18 or older, who can prove direct lineal descent from a patriot of the American Revolution. This is the only requirement for membership, and the society does not discriminate on the basis of creed, ethnicity, race, background, etc. The ancestor may have provided military service, civil service, or material support, so not all were soldiers.

In Louisiana, we have quite a few members who have ancestors who were part of the Galvez expedition. Some (such as my 5 X great grandfather Joseph Dupuis) were Acadians who had been divested of property and displaced from their homeland in the mid-1700s. (I can only imagine that these Acadians would have welcomed the opportunity to oppose the British!)

Members join DAR on the basis of descent from a single patriot, but members can later “add” patriots. I joined DAR on the basis of my lineage of another 5 X great grandfather, Landlot Porter, of South Carolina. Why him? My great-aunt had joined on that same lineage, making it relatively simple (no pun intended) for me to complete the lineage documentation. These “additional” patriots are other ancestors that you show descent from, and they are called “supplementals.” The beauty of all of this is that DAR members are constantly adding information to the DAR Genealogical Research System database, which is open to anyone for genealogical research – no membership or fee required. (See www.dar.org and click on the green “GRS” button at the top.)

But why did I join? When I first visited a meeting, I met a group of down-to-earth, caring, intelligent, faithful and involved women with whom I had in common several very important things: A love of country, a respect and passion for historic preservation, and concern for the education of our coming generations. Some were women I already knew from church or other connections, others were new faces.

We are not the same, and come from different backgrounds and even different political ideologies. However, we hold some important things in common, and this is the treasure of DAR. Different members tend to focus on different projects that are near and dear to them – that’s another wonderful thing about the organization – there are many opportunities for service, and opportunities for women to stretch beyond their comfort zones. Some of the things we do involves supporting our military and veterans, providing scholarships and taking on conservation and historic preservation projects. Some of our projects are small, and some are connected to larger statewide and nationwide projects. Our members are involved in their communities and volunteer hundreds of thousands of hours in a wide range of capacities. It’s not all just about lineage and genealogy; far from it! 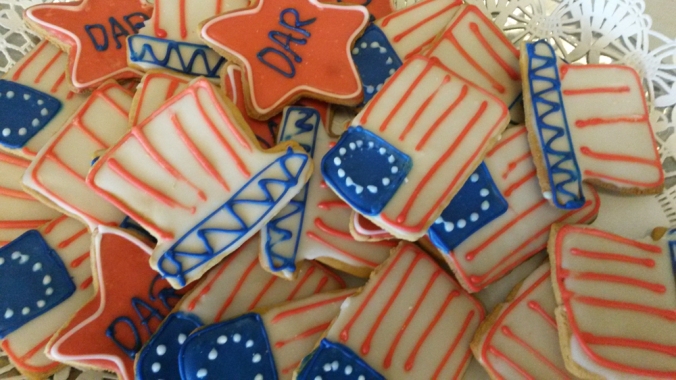 I laugh about the fact that genealogy is the “great equalizer.” If you go digging into your family tree, you will find that not every branch is exactly stellar! We are all descended from saints and sinners (and perhaps a pirate or two)! We can look at our patriot ancestors and feel some pride in what they did for American independence. I can’t help but wonder – would our ancestors be proud of us?

That’s something that DAR makes me think about. I can be so grateful to those who went before me, to those who – ancestors or not – birthed this country, inspired by ideals and concepts for freedom and self-government. DAR helps me to find things that I can do to help pass on the blessings of liberty to the next generation. Perhaps best of all, I have made some very precious friends through DAR.

With some awesome friends at the Gumbo Cookoff in New Iberia, LA

President Ronald Regan said “Freedom is a fragile thing and is never more than one generation away from extinction. It is not ours by inheritance; it must be fought for and defended constantly by each generation, for it comes only once to a people. Those who have known freedom, and then lost it, have never known it again.”

Our freedom is a blessed and fragile thing. Today, and every day, I give thanks for those who defend it and pray for their protection. I pray that God blesses the USA, and that God’s gift of freedom may be enjoyed by all people, throughout the world. Lord, guide me to do whatever I can do to ensure and support freedom, so that all may worship and live according to their conscience.

241 years.  Happy birthday, USA. May our imperfections lead us to continue to better ourselves and our country. It’s still America the beautiful, land of the free, because of the brave.

The comments reflect the personal views of the author, and are not an official statement or representation of the Daughters of the American Revolution.  For more information, see www.DAR.org.

One thought on “Independence Day: Why I am a DAR”