I rarely watch movies in a movie theater. There aren’t that many that tempt me to sit in a semi-comfortable seat for a couple of hours. Last night, I made an exception and went to a movie that woke me up at 4 AM, unable to get back to sleep.

It was a movie about America’s most prolific serial killer, who was finally – after three decades of murder – apprehended, brought to trial and put away for life. Surprisingly, it’s not filled with gory scenes and graphic death. It’s a true story: Gosnell, The Trial of America’s Biggest Serial Killer. It’s the story of Dr. Kermit Gosnell.

Gosnell was a doctor in Philadelphia, who ran an abortion clinic, The Women’s Medical Society, for over 30 years. His clinic had been the subject of numerous complaints and an occasional reprimand and fine from the Pennsylvania Health Department. He repeatedly ignored health regulations, utilized unlicensed and untrained personnel, and had many patients with complications. In fact, over 40 lawsuits had been filed against him over a 30-year period. Yet, his clinic continued to operate.

The movie begins as FBI agents and state police execute a raid on the clinic. They aren’t there to investigate the filthy, shoddy medical practices; instead, they are investigating the “pill mill” that Dr. Gosnell was running, selling prescriptions for painkillers to drug dealers. As the team moves throughout the clinic, we see conditions that are filthy, dangerous, and disgusting.

Biohazard sacks are filled with medical waste and stacked up everywhere, in freezers and even in the stairwells. Cats roam freely, and Gosnell proudly informs the team just how many rodents had been dispatched from the clinic by one particular cat. Anyone with knowledge of how ANY medical clinic is set up will be horrified to see the setup and filth and the broken, unused equipment. 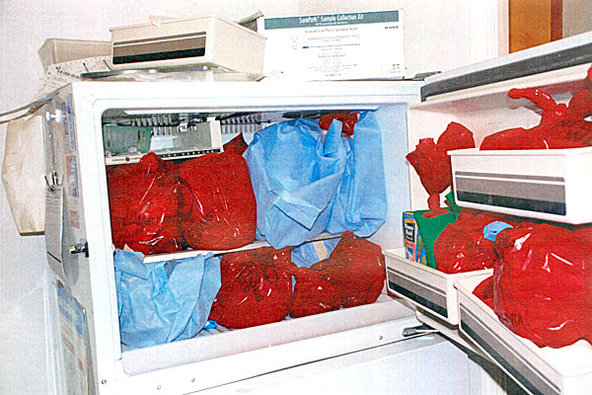 Gosnell said there was a “problem” with the medical waste removal company. From www.imdb.com

In the refrigerator were specimen jars, with tiny pairs of perfectly formed feet. Each one was neatly labeled. DNA purposes, said Dr. Gosnell. He calmly attended a woman who was waiting on her abortion while the team was there, and then proceeded to munch on Chinese takeout while still wearing his bloody gloves.

The story unfolded as the case proceeded to a grand jury and on to trial. We hear from witnesses and learn the story of the death of Karnamaya Mongar, a woman who had gone to Gosnell for an abortion. The Department of Health had decided to ignore the incident, but Detective James “Woody” Wood (played by Dean Cain) makes it a point to NOT ignore the death.

While there is plenty of evidence at the clinic and in Gosnell’s home to confirm that he is indeed selling prescriptions for Oxycontin and other painkillers, there is also much evidence that he has routinely performed abortions well past Pennsylvania’s 24-week limit on abortions, and has, in fact, murdered babies who were born alive.

ADA Lexy McGuire (played by Sarah Jane Morris) prosecutes Gosnell. While witnesses are badgered by defense attorney Mike Cohan (played by Nick Searcy), we think that the jury just might decide in favor of the defendant…until one former employee of the clinic, Betty Goodwin (played by Dominique Deon) approaches Woody and another detective with a photo of “Baby Boy A,” a child who was delivered alive by Gosnell. Baby Boy A breathed, moved, and cried until Gosnell snipped his spinal cord, ending the life of this newborn.

We don’t see the child’s photo in the movie. (It is available on the movie website.) We only see the reactions of those in the courtroom as they look upon this perfectly formed infant. In that moment, we realize the true evil of this killer, described by many as “charming.” Indeed, Gosnell (played by Earl Billings) is the smiling, charming face of evil.

Earl Billings plays a charming Dr. Kermit Gosnell. He offers to cook breakfast for the detectives executing a search warrant in his home. They decline.

Gosnell’s clinic was an abomination, and we wonder how he was left to operate for so many years. We learn that the governor of Pennsylvania had told the Department of Health “hands off” Kermit Gosnell’s clinic. Perhaps this is because abortion is seen as a “hot button” topic. Regardless of where one stands on that issue, no one could possibly agree that Gosnell was acting in the best interests of his female patients.

Even the most staunch pro-choice believer would have to agree that Gosnell’s killing of infants who were alive is clearly murder. While the trial found him guilty of murder of three infants and one adult woman, there were other infant bodies that pointed to the fact that these three babies were just the tip of the iceberg.

This was a movie well worth my time. I had read the book, and so had some knowledge of the facts about Gosnell. The book, Gosnell: The Untold Story of America’s Most Prolific Serial Killer (Ann McElhinney, Phelim McAleer) is completely documented. The scenes depicted in the movie were not exaggerations, they were based on actual evidence from the crime scene. Interestingly, the New York Times initially refused to list the book on its bestseller’s list – even though it was number 3 on Amazon and Publisher’s Weekly lists.

The movie shows only a small part of his activities, but does a masterful job of telling the story accurately and with sensitivity and even compassion. The movie broke crowdfunding records – it raised $2.3 million from nearly 30,000 donations. As sad as the subject matter, we are left with a positive ending, and the satisfaction that, at least in this instance, justice was done.

Visit the movie website for information and theaters: http://gosnellmovie.com/

You’ll find the heartbreaking photo of Baby Boy A under the “resources” link.

2 thoughts on “The Charming Face of Evil”