Today is Thanksgiving, and – dare I say it – a very American holiday. We’ve seen decorations of pilgrims and pumpkins, corn and horns of plenty. We’re used to our holidays being commercialized, and today is particularly a good day to reflect on what, exactly, this holiday means and how it began.

In 1789 (over a hundred years after “the first Thanksgiving”), George Washington issued a Thanksgiving Proclamation. I think it is particularly important to consider this document, as we are inundated in the media by claims that “God had nothing to do with the founding of America.” A recent “man in the street” video piece by The College Fix asked students whether or not it was acceptable to celebrate Thanksgiving.

“ooo. I’m leaning towards no. I feel like with, you know, the historical context, the, kind of, you know, the really awful oppression of, you know, indigenous peoples, is like the holiday is really like, praised by I think, people more like the conservative side of things, to like uphold that sort of tradition…”

“Ummm, no. I mean, it’s probably not as bad as Christmas or Easter…”

The reporter was at a small Christian private college in Minnesota. Are you freaking out yet? I am, and not just because of the fact that these students obviously need to take Speech 101 and remedial English. Some of the students even admit that their “standard public school education” Thanksgiving story was this great meeting between the pilgrims and the Indians where “the Indians showed ‘em how to plant corn, and obviously that’s not true.”

I’ll leave it to you to draw your own conclusions. I doubt that they learned about George Washington’s Thanksgiving Proclamation, issued 3 October 1789: 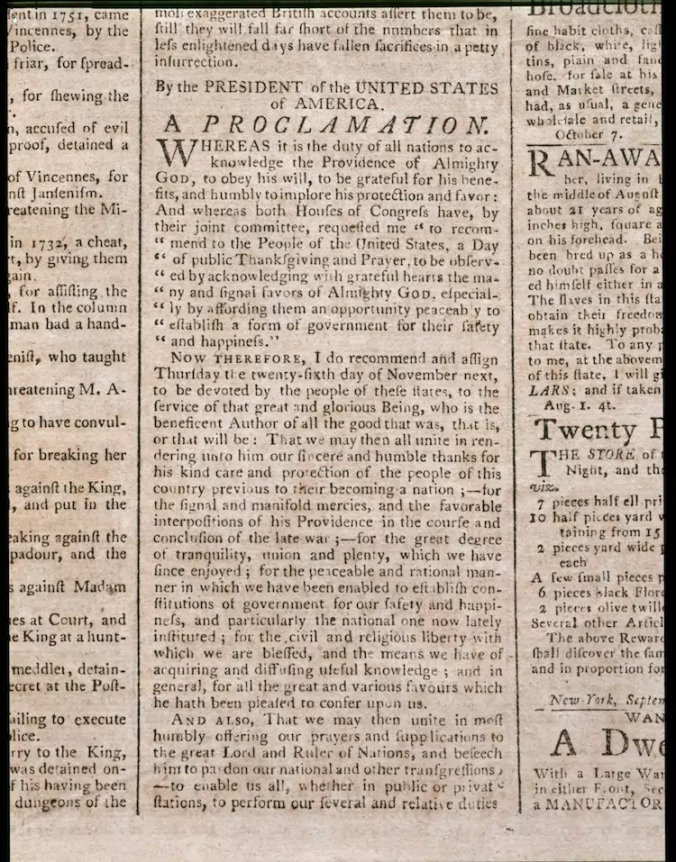 “Whereas it is the duty of all Nations to acknowledge the providence of Almighty God, to obey his will, to be grateful for his benefits, and humbly to implore his protection and favor —and whereas both Houses of Congress have by their joint Committee requested me “to recommend to the People of the United States a day of public thanksgiving and prayer to be observed by acknowledging with grateful hearts the many signal favors of Almighty God especially by affording them an opportunity peaceably to establish a form of government for their safety and happiness.”

The Proclamation goes on to specify the date of the holiday, and then that the day “be devoted by the People of these States to the service of that great and glorious Being, who is the beneficent Author of all the good that was, that is, or that will be…”

Washington’s proclamation came a little more than a hundred years after the arrival of the Mayflower. He was closer to that history than we are, and no doubt was aware of the dreadful first winter the Pilgrims endured. He would also have been aware of the history of the native tribes that played a role in the lives of these early settlers and the warring between them. The Wampanoag did work with the settlers, and were no doubt glad to have help in their own struggles with the Iroquois (who were warring with the Wampanoag and others). 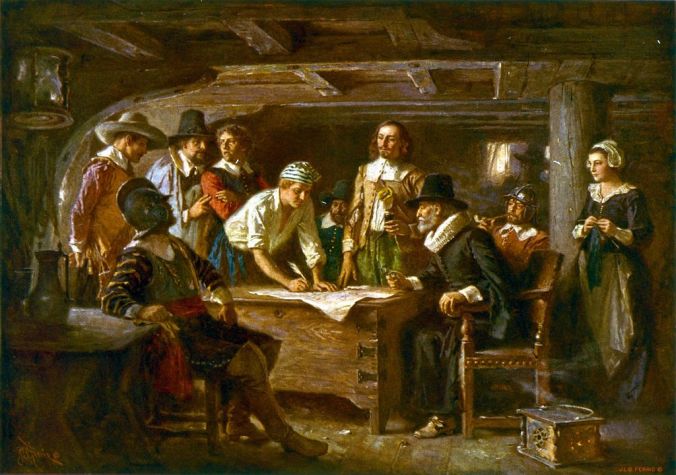 The travelers had set up an agreement based on Biblical principles that would establish how they lived and worked when they settled in the New World. Laws were established that would apply to everyone, regardless of political or religious beliefs, and all property would be community property. Basically, “from each according to his ability, and to each according to his needs.” Sound familiar?

Well, after a dreadful, difficult voyage over, they settled in and got to work. And you know what happened? Their setup didn’t work. They had created this “group venture” so as to be able to repay their sponsors back in England, but it was failing, because there really wasn’t any personal responsibility.

And…this was happening with a group of Christians who believed in sharing and caring for one another. It wasn’t a bunch of criminals or shysters; if any group could have made such a socialistic setup work, it was this bunch. Fortunately for us, John Bradford, the colony’s governor, realized it wasn’t working. Instead of beating a dead horse (possibly not a metaphoric saying in this instance), he started over. Each family received a plot of land, and was able to use it as they saw fit. If they had surplus, they could sell it. If they didn’t have enough, they could buy what they needed. They had a basic capitalistic society, and it worked.

To be sure, the Wampanoag had pitched in to help them survive their first winter, and had a good relationship with the colony. But it was more than just their assistance that helped the settlers at Plymouth survive and build a colony. Religious freedom and the right to work and make one’s own success also had a lot to do with it.

For anyone disturbed by the “Americanism” of the holiday, I will remind you that while Washington himself had the good of America as his primary concern, he didn’t close out the rest of the world as he encouraged prayer to God:

“…to protect and guide all Sovereigns and Nations (especially such as have shewn kindness unto us) and to bless them with good government, peace, and concord—To promote the knowledge and practice of true religion and virtue, and the encrease of science among them and us—and generally to grant unto all Mankind such a degree of temporal prosperity as he alone knows to be best.”

Amen to that. I wish you a happy Thanksgiving.

One thought on “Thanksgiving”