My friends Diane Moore and Victoria Sullivan are both gifted authors (and publishers) who divide their time between south Louisiana and the mountains of Tennessee.  In addition to new worlds of poetry and polyploids (more on that later), they have introduced me to the Community of St. Mary, an Episcopal Benedictine convent on the mountain in Sewanee. Music partner Joshua (aka Bubba) and I were featured musical performers at a recent fundraiser for the convent.

It was a weekend of unexpected blessings and surprises.  We were provided lodging in the convent, and this respite from daily life was welcome indeed.  Not just the quiet and beauty of this place on the mountain, but the peaceful presence of the sisters create a haven saturated with the presence of spirit. Even cell phone service is nonexistent. Hooray!

Convent of the Community of St. Mary, Sewanee, Tennessee

Saturday was a day of focus on the fundraiser, a focus on the gig.  Haul equipment, check out the venue, set up, do sound check, run through everything, put away cases.  Head back to the convent to change for the evening.  No big meal prior to playing or singing, so we fixed plates of a delicious meal and asked the caterers to please keep them safe as we’d be eating later.

Setup for St. Mary’s Gala…I’m glad we only had to deal with the sound system and instruments!

A room a bit too cold for this south Louisiana singer; I was trying to ignore the temperature as I sang.  Don’t move around, the stage floor was hollow, and our prerecorded tracks (which had behaved perfectly in rehearsal) decided to skip occasionally.  Technology is wonderful – when it works. (Computer? Tablet? Misbehaving!)

The evening was enjoyable in spite of a couple of gremlins in the technology, and successful.  Sister Madeleine Mary and her team of interns (Heather, Waddy and Andrew) had put together a wonderful event, and we were delighted to be a part of it.  At then end of the evening, it was teardown and loadout.  In the midst of it all, we discovered that the caterers, in their rush to clean up, had thrown out our food.  So much for that caramel cheesecake…sigh. I probably eat cheesecake once a year, and that was going to be my yearly cheesecake decadence.  Oh, well.  A late-night trek to McDonald’s in a nearby town brought memories of even later night meals after bar gigs. I finally crawled into bed exhausted.

Sunday morning I pried myself out of bed at 7:40 and performed the barest basics of morning presentability.  I made it to the chapel for Eucharist with 5 minutes to spare.

The chapel at the convent. (Don’t you love fisheye lenses?)

I was expecting a small crowd, but this tiny chapel was full.  Barely awake (with no time for coffee), I settled into the liturgy and hymns with relief.  I’m tired, Lord, but I’m glad I’m here.  I relaxed into the community of the congregation.  In addition to the sisters, interns and Diane and Vickie, there were quite a few faces I’d seen the night before.

The service ended and we enjoyed breakfast together.  And coffee.  (Thank  you, Lord, for coffee; it is absolutely one of your finest creations, along with music and chocolate. Amen!)

I looked to the afternoon, spread out before me with very little “to do” listed there.  Lunch at 1.  Repack the car.  See some mountains. Take some photos. Listen. Above all, just listen, just be. 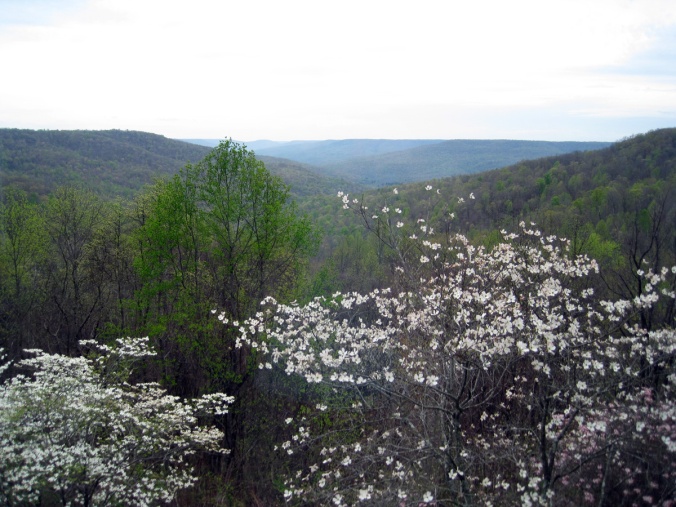 Dogwood trees on the mountain

Every child attending a Catholic school hears, sooner or later (usually both sooner AND later) , The Lecture On Vocations. Is God calling you to Holy Orders?  I’d heard The Lecture often, but could never imagine myself in such a setting.  I knew the Sisters of Mercy that served my school, and spent some time visiting and praying in their convent.  I could not see myself there, and always felt a call to motherhood instead.

The Community of St. Mary, though, is more than just the sisters who live in the convent.  They have associates who live in the community, and the convent’s influence is evident to even a new visitor such as myself.  The rhythm of their lives and peaceful presence are threads woven beyond the physical space of convent and chapel.  Through our mutual friends, they have touched my life in the past as far away as south Louisiana.  Through spending time here, they have touched my life again, and I returned home to Louisiana with a bit of their spirit with me.

The very air there is saturated with a sense of the creative, evident in some of the silent auction offerings at the gala, and certainly evident in the writings of Diane and Vickie. One of Diane’s poetry collections, In a Convent Garden, has a photo of a small concrete statue of a merry nun on a swing.  I smiled when I saw the original. Two of Vickie’s novels deal with a fascinating “it-could-almost-happen” new race of humans called polyploids.  I will let creativity strike as it may and be content that I soaked up the blissful peacefulness.

Yet the news about him spread all the more, so that crowds of people came to hear him and to be healed of their sicknesses. But Jesus often withdrew to lonely places and prayed. – Luke 5:15-16

I realize such quiet time isn’t a luxury, but a need. If Jesus needed solitude and “down time,” don’t we all? I was reminded of a far distant ancestor of mine, who at the end of a life of political and family intrigue, leadership, and imprisonment, retired to a convent in France.  I can understand her desire for the sanctuary that such a place provided.  We all need rest to combat the weariness of the spirit.

Diane’s blog is A Word’s Worth

Poetry and other good reads by Diane, Vickie, Anne Simon and others at Border Press